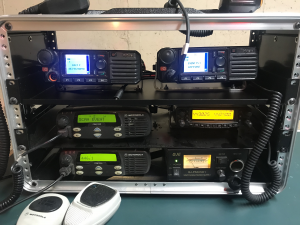 For easy transport and easy setup the “Go-Box” comes to play. For me it is a 6m to UHF setup. I have not had the need to use HF for any event, only 6m on up.  The current Go-Box has 5 radios (1 dual band) for 6 simultaneous frequencies on 10m, 6m, VHF and UHF analog and DMR. The box is a shallow 6U with 2 shelves:

The Mobile Travel Kit – My Car

My car currently has a CSI800D FM/DMR dual band radio in it. It works OK, but does not have DMR Roaming. Additionally, the car also has a APRS Mobile I-Gate with WX3in1 Smart Tracker from Microsat with a tailored beta firmware.

The entire route between our houses has DMR coverage, but over two separate systems; CT ARES and NYC Metro. The car also has a DMR OpenSpot HotSpot via cell-internet, but that’s kind of cheating. Thus, RF Ham Radio is the goal – internet as backup!

The goal is a Roaming DMR setup so that as the car moves, the best DMR repeater is always automatically selected much like cell towers as.

GO-BOX 3 is designed based on a shallow 4U SKB Gig-Box I had laying around. At this time (it may change) it has 4 radio slots:

A 4U molded rack box similar to the other Go-Boxes have been procured, although not assembled yet. The box will have a HYTERA RD982U with DMR IP Connect and ANALOG FM capabilities.

The box will rely on an external power source.

Box 5 will be mini standalone business level cross-band FM Narrowband repeater. The concept is in place. Radios are on the bench working. The appropriate inexpensive box has not yet been defined.

On the list of future builds is a small low-cost ROW (Repeater on Wheels) for events. The objective is the smallest trailer with a secure job-box for a cross-band or in-band repeater to be powered from a marine-battery and dropped in a convenient location for an event. A collapsable 20′ antenna mast needs to be attached.

The box will also contain an APRS I-Gate.