Ok, so all hams have to do HF. Not sure, but it is considered a must.

After being a ham for 25 years I have finally assemble my first really functional HF-station. I have had the equipment for at least a decade, but it has been laying around without a real purpose. Always have been something to get ready for the Fall.

About five years ago, I made a half-hearted attempt by putting a no-radial vertical on the CT house about 25′ above the ground. Never had time to use it at home, so it was rigged to a laptop and remote operated from hotel rooms via Skype for the audio and HRD for the controls. It kind of worked, but not really well. The remote part was acceptable, but the home base not so good.

In the airplane, sitting in the dark (transatlantic flying eastbound most often departs the US late night and arrives in the morning) I would also surf the bands a little. Oceanic flying requires one HF to be monitoring air traffic control, but thankfully with sel-call. The second radio was used to surf the ham-bands. Some airplanes had tuners and combiners that could handle the frequencies others did not. I can tell you that putting out a call as aero-mobile in the mid Atlantic creates a pile-up.

Fall of 2017 I promised myself it was time to have something running before snow. We have 5 seasons in this neighborhood – A mild Summer, a colorful Fall, 3 months of snowy Winter, Mud Season followed by a beautiful Spring! Living 2+ miles at the “end” of the dirt road we know all about the Mud Season. 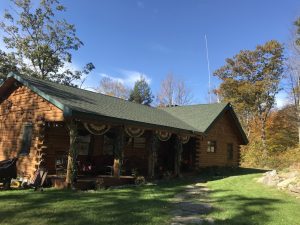 You can see the vertical in the lowered position. When the home made telescopic mast is extended the base it at the elevation of the top shown. Just behind it is a G5RV between the trees. It does pretty well with my IC7000. When supper arrives, the goal is to improve the location of the G5RV.