In 2018 we were given the “key” to revamp the JB Sag Operations.

This SAG Operation is as the name indicates; Support And Gear, consisting of;

Traditionally, the coordination was centralized and co-located at Race HQ but not inside HQ, with little focus on Racer Services and a cumbersome distant untimely coordination due to cumbersome lines of communications through ham relay. (Note: N1ATP believes the ham net controller needs knowledge and status as decision maker and not the endless “standby for answer”.)

The SAG Operation is a combination of a very slow following of the last biker to a fast paced support of mechanical problems in the main race pack. This leads to a stretched out quickly moving and responding support system. We have found that it shortens the mechanic’s response if we can triage the problem with a “first responder” and also provide a come to my location approach rather than searching miles of roadway.

In 2018 we re-designed the SAG Operations by equipping all vehicles with a VHF DMR high powered mobile radio network on commercial frequencies. Over the years it has become more and more difficult to recruit hams for the task. There may be a litany of reasons for ham exodus from events in general. Thus, in 2018, I changed the comm system from ham to commercial frequencies. This allowed us to use ex-racers as our volunteers. Their familiarity with racing, bicycles and the course itself gave us a superb edge on previous efforts. It also freed up a seat in the vehicles to be able to transport more racers. We are operating simplex, which in the hills of the Berkshires may be challenging, but the beauty of DMR makes it perfect or “nothing”. White noise and picket-fencing are gone. This makes DMR perfect for non-hams.

The 2018 SAG Team consists of 3 vehicles – 1 coordinator and 2 transports. The end of race SAG (callsign Snail-Pacer) also has a nurse onboard. Granted, an ambulance is also trailing the pack for much of the race. The designated end of race vehicle is a hospital security vehicle, but unfortunately was not a part of our comm system. In 2019 this caused premature opening of some intersections controlled by police. This was corrected in 2021 and “Tail End” is now on our comm net. We are adapting and improving every year. A event safety de-brief is a wonderful recap and source for improvements.

The SAG Team Coordinator and forward vehicles float ahead of the tail end to cover about a 1/4 to 1/3 of the race course (total 30 miles). A Bike Repair Vehicle is also included in our comm system as of 2019 and we can coordinate best service coverage from bike repair to recovery and transport. In 2021 “Bike Repair” officially became a part of the SAG System. Racers are provided a HQ phone number for service request. It is relayed by race-radio on the MEMA 800mhz  network or by cellphone to SAG.

The difference in a local floating coordination from a central coordination is the ability to rapidly adapt to the actual conditions. As a result we have better distribution of SAG units and more Bike Repair Requests.

For 2022 we are adding APRS on key vehicles like SAG Coordinator, Bike Repair and End of Race. This is then viewable in Race HQ. Race HQ has a professional Dispatcher to communicate 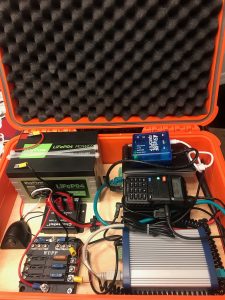 with half dozen agencies and SAG. It is super professional! The APRS will allow him to see the last 1/3 of the bike race and later the running race move in the Course. APRS in the Berk’s is not simple. The terrain is “complicated” and APRS Digi and I-Gate network is scarce. The 2022 APRS Trackers is via cell service from self supported weather resistant cases with LifePO4 batteries. This cases also function as a roaming I-Gate for future expansion of RF Trackers.

How many antennas on a SAG Vehicle? A minimum of 3!

Unfortunately, our efforts and success have not increased the need for ham radio, but we always welcome ham volunteers to join our team.

At the end of the day we are using our knowledge and radio communications to support a charity (the race)!

Link to the Annual Plan